Once again Simon Brett and Sheila Mitchell in conversation about HRF Keating’s newly published work ‘A Kind of Light’. All welcome.

Bushey Public library have kindly agreed to host the third event where Simon Brett will be in conversation with Sheila Mitchell on the subject of her late husband’s (HRFKeating) posthumously published book, A Kind of Light. Although Harry was best known for his Detective novels – in particular those about Inspector Ghote of the Bombay CID – he also wrote a handful of main stream books. This, the fifth, is set not in India, which had become an integral part of his life, but in Africa. It is a novel of two intertwining stories one in Victorian times the other in the year he wrote it, 1987.Each narrative pursues its own ongoing story and both explore their protagonists fight to make sense of their lives and those they meet on their journeys. Simon, as a fellow crime writer, knew Harry very well and will be posing a wide-ranging set of questions which will explore what it was that made Harry such a success. As well as attempting to answer these questions, Sheila will hope to introduce some in her turn about Simon’s amazing achievement of just having published his 100th book. 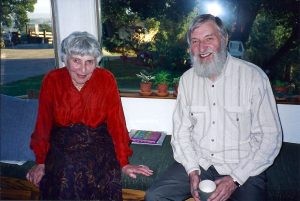 Sheila with Harry some years ago.